Dear son,
Mary, the mother of mankind and the caring mother of the Church of her Son, asks you who are faithful to my call and loved by me because always attentive to my requests: convert your heart stained with sin and go out to meet Jesus who comes! The whole of humanity is at this time wrapped in a cloak of thick darkness, while Satan extends his reign deceiving, distorting and destroying that which my Son has accomplished: the redemption of mankind. The failure of his plans brings the Devil to desire the destruction of mankind and, as I have said before, when the sky will turn red a great punishment will strike the world. All of this can be avoided if you consecrate the lands of the sons of Abraham to my heart, but you all continue to ignore this, even though the conditions which mankind has reached have already been foretold by the Sacred Scriptures. Now, in the name of my Son I ask you all:

Over the centuries Satan has prepared a heavenly and earthly army, opposed to the Kingdom of God announced by Jesus, capable of having a negative influence on humanity and the events of history, but the weapons of my Son are expressed in the blood and the love for every human being created in the image of God. Now go and deliver this message to the priests. I bless you in the name of my Son Jesus. 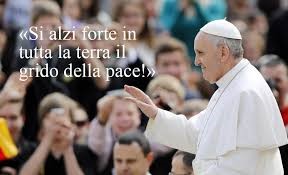 Plea made by Pope Francis for peace in Syria