The painting of Mary Bride of the Family 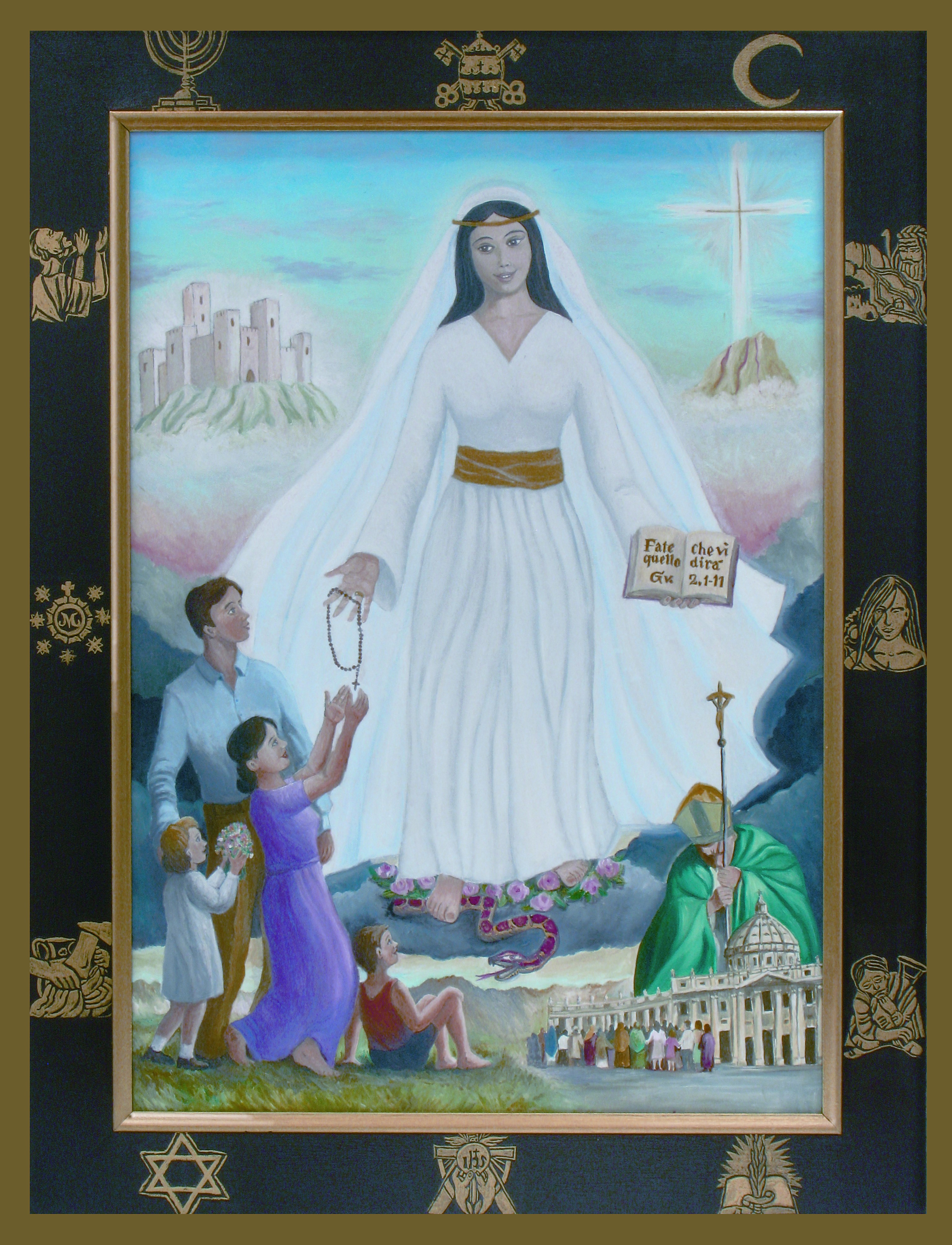 DESCRIPTION OF THE IMAGE

Top right: the Mount (a symbolic place of the encounter between God and man) on which stands the cross of Christ that is the “Constraint for the union between heaven and earth”. Three “blood rivers” spring from the cross of Christ”. They are a symbol of life and salvation for the three Abraham’s first-born populations (Jews, Christians and Muslims) and for the whole mankind too.

Top left: a representation of the Heavenly Jerusalem.

Bottom left: the family, which is one of “the greatest expressions of God’s love” according to the Holy Virgin Mary. For this reason, the ancient Serpent, the Devil, picks on the family. Mary, the Bride of the Family, keeps him immobilised under her feet, since she participates in the victory and the universal regality of Christ.

Bottom right: the elderly and infirm pope John Paul II, the vigilant universal shepherd of the Church of Christ.
Over the family and the Church there is a dense “dark cumulus cloud” that represents the oppression of evil forces over the family, the Church and the whole mankind.

In the centre: the image of Mary Bride of the Family. Her figure is impressive, feminine and dynamic, young and determined, deeply rooted in the great Church’s tradition but modern at the same time.
She represents an image of the purified Church, renewed by the Holy Spirit’s action. The Holy Virgin gives to the family the beads of the Rosary of Christ’s mysteries and the book of God’s Word, that summarize the “weapons” necessary to repulse Devil’s assaults.
The biblical reference written on the opened book concerns the marriage at Cana (Jhn 2) and its emblematic lack of wine, which is a spiritual condition similar to the one of families and the Church nowadays.
God’s response to this situation is the sending of Mary, the mother of Jesus (Jhn 2,1), in the role of Bride, so that the glory of the Lord Jesus (Jhn 2,11) could be shown through her and by following her directions (Jhn 2,5). That glory which is the foundation of Church’s faith (Jhn 2,11b) and of the stability of families.

THE TWELVE SYMBOLS AROUND THE PAINTING

These twelve symbols and those in the painting represent a summary of the revelations of Mary Bride of the Family.

The seven-lamp lampstand: (Hebrew menorah) it’s one of the most ancient symbols of Jewish religion. It symbolises the light of God’s Word and its seven lamps represent the six days of the creation that are inclined inwards toward the seventh day, i.e. the shabbat.
Its meaning was largely explained by the vision of the prophet Zechariah (chapters 4-6), when the angel reveals that the seven lamps of the menorah represent the divine eyes, while the seven tubes for the oil supply to lamps represent the Holy Spirit’s inspiration.

The pontifical insignia with Peter’s keys: It’s a symbol of both pope’s Petrine ministry and our love and submission to the Church.

The crescent: it’s a symbol of the offspring of Ismael, son of Abraham, which merged into Islam since the mid-7th century A.D.

The patriarch Abraham and the three rivers: the rivers represent his descendants (Jews, Christians and Muslims) historically divided, but spiritually called to a path about reconciliation and unity in the name of the one God of Abraham.

The prostitute: it refers to the beautiful message of Mary addressed to women who prostitute themselves.

The paralytic: it refers to the continuous call of Jesus and Mary to take care of those who suffer in their body or their spirit.

The Eucharist: it’s the memorial of Christ’s life and sacrifice. It’s the bread that nourishes souls, the only food which gives the entirety of Jesus.

The star of David: also called the “Shield of David”, it’s a symbol of the regality of Jesus, the Messiah who belongs to David’s offspring.

The Maundy: it’s a symbol of humility and service, like Mary who called herself the humble Servant of the Lord and lived as it.

The Rosary ring: it’s a symbol of our consecration to Mary through the seven vows. These are Service to brothers, Veracity, Non-violence, Sobriety of life, Chastity, Obedience and Testimony.

The praying person: it means the importance that the prayer and the life’s contemplative dimension have in these messages.