Week of prayer for the peace in the Middle East

DESCRIPTION OF THE IMAGE

In this painting Mary is represented in a majestic way before a big open Bible on the background. It’s a way to affirm the importance of the role that God entrusted to her in his universal salvation plan. She is depicted acting as the Bride of the Family, because she is the one who represents the Almighty’s “Bride-Community”, namely the Church of Christ, the “Abrahamic family” and the whole “human family”, made by all populations and nation on the Earth. Under the Bride’s feet there is a big poisonous snake which represents “the ancient Serpent”, the Devil, the main cause of all mankind’s evils and sufferings (Gen 3,1ss; Rev 20,1ss).

Bottom left: the image of Abraham while offering his son Isaac as a sacrifice. Just a second before the sacrifice, he glimpses the image of the Messiah-crucified, the only and real sacrifice able to free Israel’s descendants and the whole mankind from the Devil’s tyranny, from sin and from death.

Top right: three blood rivers spring from the wounds of the Messiah-crucified, and they symbolize the three Abraham’s first-born populations. These three rivers merge in a single impressive blood river that reaches every corner of the world. In biblical language the blood is the life (Gen 9,4-5; Jhn 6,53-55), so the Messiah-crucified is considered as the “divine spring” from which flows the “stream of life”, that should reach the whole mankind through the three first-born populations.
The starry sky and the sea’s sand both represent the multitude of descendants promised to Abraham. (Gen 22,15-18).

Top left: the image of the heavenly Jerusalem, the Holy City that represents the final fulfilment of God’s salvation plan. The divine Revelation ends with its descent from heaven.
In this city there will not be tears, nor diseases, nor death anymore, since only peace and love will rule there (Rev 21,1-4).

Bottom right: the image of the Church, first fruit of the kingdom of Christ. It gathers all of those who recognize Jesus as the Messiah-Son-of-God and who bear witness to him over the centuries (Rev 12,17).

THE LETTER OF THE LATIN PATRIARCHATE OF JERUSALEM 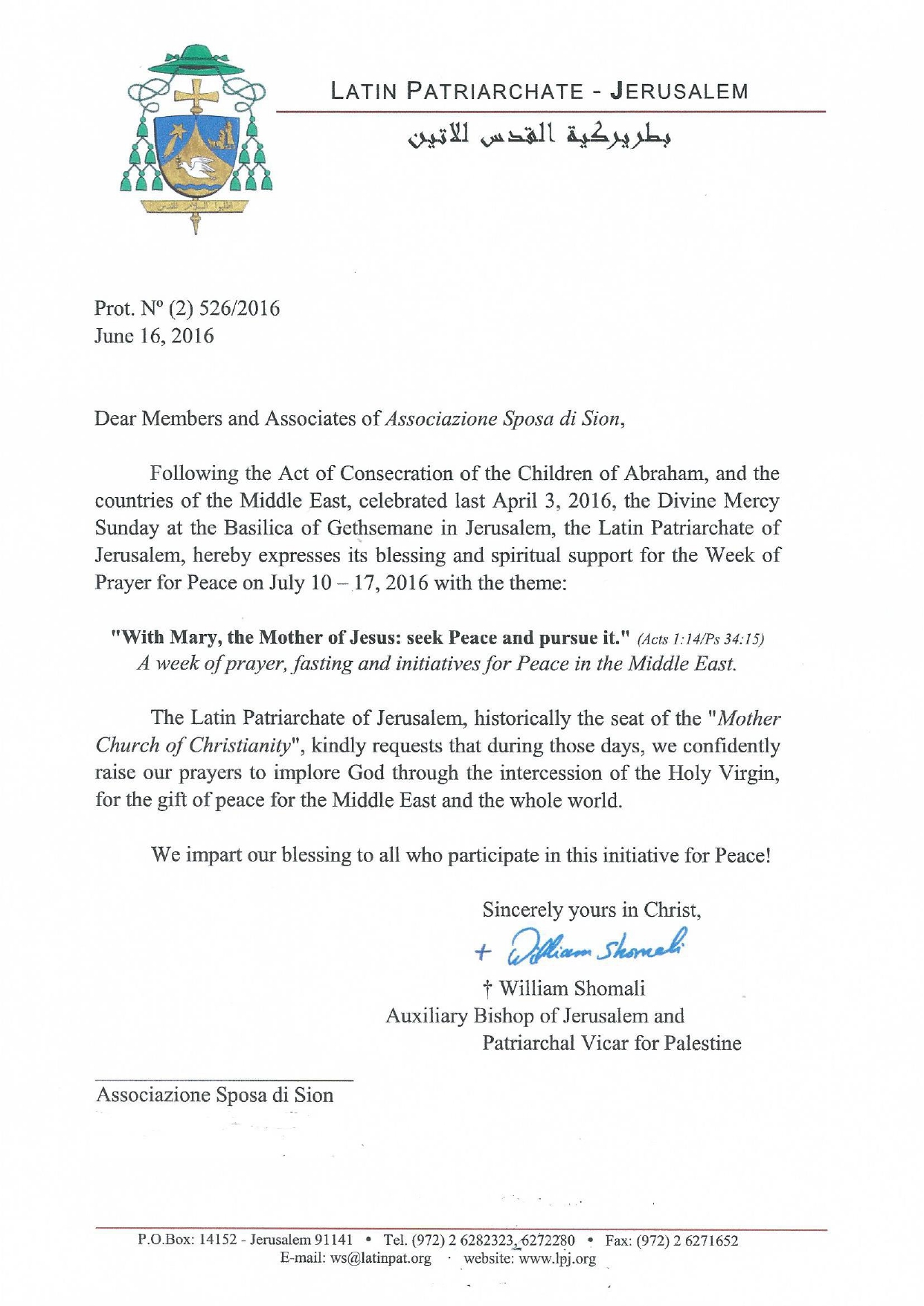 REFLECTION: THE PRAYER FOR PEACE IN THE MIDDLE EAST
by mons. William Shomali - Patriarchal Vicar for Jerusalem and Palestine

Violence is an end in and of itself, and it often makes statesmen feel powerless. There are many peoples and too many representatives and players involved. It is difficult to find a solution in this hostile situation. There are contradictory interests as is the case in Syria, Iraq, Yemen, Libya, etc. We see that we have reached a point in which the only one who can help is the Lord. So, we ask our Lord as he told us to do: “Ask, and it shall be given you; seek, and ye shall find; knock, and it shall be opened unto you: For every one that asketh receiveth; and he that seeketh findeth; and to him that knocketh it shall be opened.” (Matthew 7, 7-8).
We can cite all the times over the course of history when what was impossible was made possible. Here are two examples: the Berlin Wall that stood invulnerable for 42 years. We all thought that it would be eternal! All of a sudden the wall fell apart and collapsed, just like the walls of Jericho. The force of prayer knocked them down. Another example of prayers being answered was Anwar el-Sadat’s visit to Jerusalem. It was so totally unexpected that it was considered an absurd dream. But it happened, and in his speech he asked for peace and later the peace treaty was signed. Our Lord always surprises us and this happens if we open ourselves up and prepare ourselves to receive the answer to our prayers. Prayers do not change the Lord; we are the ones transformed in order to be ready and willing to receive the gifts that he wishes to grant. The answers to our prayers are not immediate, and yet we must believe that they will bear fruit, just like a tree we plant today which will bear fruit in a few years. This is exactly like the planting of the olive tree by Pope Francis together with President Perez and President Abbas two years ago. The gesture of planting together symbolizes their efforts for peace; it was done for peace. Unceasingly we raise our prayers to heaven while fasting and with the certainty to receive the answer to our prayers for peace. We therefore expect answers to our prayers from our Lord and from our Blessed Lady, who, in all of her apparitions, has asked us to pray for peace. 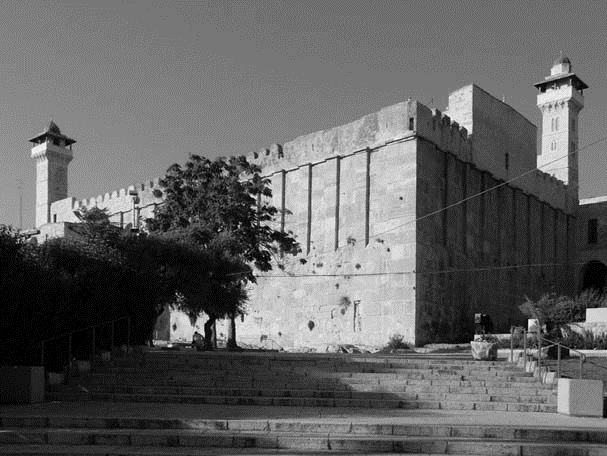 Hebron: The Tomb of the Patriarchs

Reverend Mother, During the next few days I will be in Jerusalem, and I will go to Hebron (where I was – during a pilgrimage for peace – in 1968) on a pilgrimage to the Tomb of the Patriarch Abraham, and the other Patriarchs. The point from which peace in the world radiates is, in a certain sense, there. […] The Lord himself […] and Mary herself […] have prophetically seen and established it as a “unifying point” of all nations and of all history. Therefore, the current story of these peoples is to be found in the “inevitable necessity” of finding in the unity of the Abrahamic family its historic haven: the unity, peace, justice and grace of the entire world depend, in fact, in a certain sense, on this haven. In other words, It's necessary that the triple family “of the peoples of Abraham” (Jews, Christians and Muslims) finds around the tomb and the altar of the Patriarch, which they have in common, its unity, its peace, its mercy, its justice and its common point of historical advancement toward the future […] for the unification and the reconciliation of the family of the peoples of Abraham and so of the peoples of the entire earth. In this cosmic, atomic and final period, there is no alternative to unity, peace and justice among the peoples! […] This pilgrimage to Hebron is to be inserted in this inevitable and growing hope of Abraham: It is, after all, the ideal continuation of a similar pilgrimage to Hebron in 1968 (immediately after the Six-Day War) in nearly desperate conditions. Today, the sky has almost miraculously cleared and a large star, almost the new star of Bethlehem, has appeared in the skies of the Church and of the world. Poetry? Utopia? Yes, but the facts themselves (totally unexpected and almost miraculous) indicate this! It is a question of prophecy (Is. 2: 4; Luke 4: 14; Koran III: 9; III, 64) destined to become history: a history that is advancing towards the inevitable frontier of the Kingdom of Christ – the Kingdom of the Heavenly Father! – which, through the mediation of the Patriarch Abraham will bring about in the world unity, justice and disarmament, and, along with them, grace, joy and peace! The sweet Queen of the World, the Mother of the Church, the Mother of all peoples and Our Mother, wants this – “deeply” – this peace, this grace and the joy of her children of all the continents. The Lord and Mary – the Most Reverend Mother – give us the grace to be so united for them so that we too (in a certain sense and in some way) can take part in and be protagonists in this divine (almost utopian) plan of love and joy. Fraternally in the Lord,